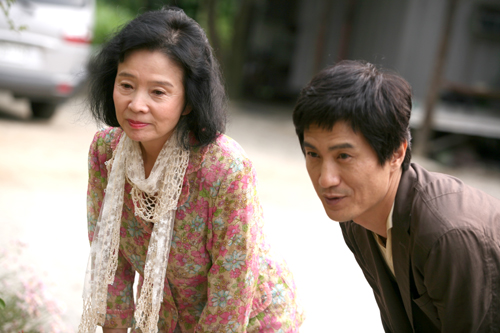 The  37th Annual Los Angeles Film Critics Association (LAFCA) Awards gave its Best Actress honor to Korea’s YUN Jung-hee for her performance in <Poetry>. Directed by LEE Chang-dong, the film stars Yun as a dandy old lady who lives with her grandson and the inner awakenings she experiences as she starts to take a poetry class and the harsh realities she finds she has to face.
Yun, whose name is often spelled as YOON Jeong-hee, is a well-known Korean actress who started her career in the 1960s. She has featured in more than 300 films which include KIM Soo-yong’s <Mist>, LEE Man-hee’s <The Legend of Ssarigol>, and SHIN Sang-ok’s <A Court Lady>. Married to pianist PAIK Kun-woo, she retired in 1994 to live in France until her comeback last year with Poetry.
The film was previously in competition at the Cannes Film Festival last year where it won Lee, who also wrote the script, the award for Best Screenplay.The film was produced by UniKorea Culture & Art Investment Co., Ltd. and Pine House Film. Seoul-based Finecut handled the film’s international sales. The film sold to multiple territories including to France where Diaphana Distribution handled it.
The runner-up for LAFCA’s Best Actress award was Kirsten DUNST with her performance in <Melancholia>. Best Picture went to Alexander PAYNE’s <The Descendants>, with runner-up going to Terrence MALICK’s <The Tree of Life>, which won Best Director. Best Actor went to Michael FASSBENDER (A Dangerous Method, Jane Eyre, Shame, X-Men: First Class).
Asghar FARHADI’s <A Separation> became the first foreign film to win LAFCA’s Best Screenplay award. <The Descendants> was runner-up in that category. LU Chuan’s <City of Life and Death> won Best Foreign Language Film, with A Separation as runner-up.
Dec. 13, 2011
Any copying, republication or redistribution of KOFIC's content is prohibited without prior consent of KOFIC.
Related People Related Films Related Company