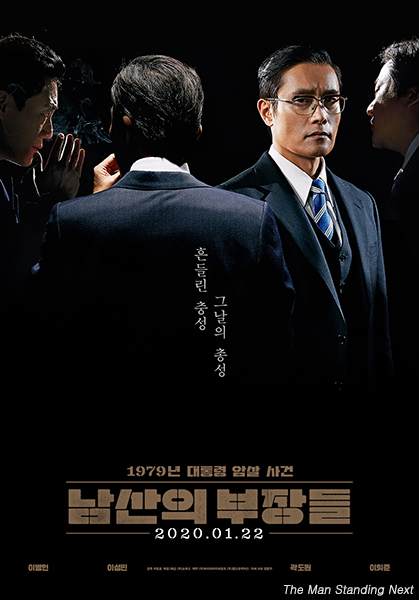 The Man Standing Next, the title Korea submitted to the 93rd Academy Awards for the International Feature Film category, is attracting media coverage outside of Korea. On January 18, the US-based entertainment trade website The Wrap live-streamed on YouTube an interview with director WOO Min-ho and actor LEE Byung-hun, hosted by film expert Steve POND. When asked what it feels like to be the first Korean entry since PARASITE won Best Picture last year, WOO said, "While it's exciting and amazing, it feels like we are in the regional qualifiers for the World Cup. […] I hope we can make it to the finals." LEE said that The Man Standing Next is a “film of a different nature and genre than PARASITE; it is a film that tells a real event from history. It is a movie that captures the social climate and atmosphere of the 1970s, so I think it might show a different side of Korean cinema.” The Wrap paid particular attention to how the events depicted in the film compare with the actual events, the circumstances that led to the choice of this subject matter, and the director’s intention in making this film.
On the 22nd, Screen Daily, the online counterpart of British film magazine Screen International, also published an interview with WOO. “When I spoke to the press and audiences online at the Udine Far East Film Festival, they compared the events in the movie to Roman history in which Brutus kills Caesar”, the director said. “In a way, the film has a classical narrative structure of a power struggle where the second-in-command kills the first.” Which explains why foreign audiences should not have difficulty getting into the movie without any previous knowledge of Korea’s recent history.
Additionally, the American entertainment website Variety ranked The Man Standing Next among the “Top-tier Awards Contenders” in its Best International Feature Oscar predictions published on January 7.
Based on the real-life assassination of President PARK Chung-hee, The Man Standing Next is a fictional account of the last 40 days before the chief of the KCIA, played by LEE Byung-hun, fired the shot. The film attracted a total of 4.75 million spectators when it was released in Korea on January 22 of last year and went on to top the yearly domestic box office. It has earned 11 nominations in 10 categories from the Blue Dragon Film Awards, whose ceremony will be held this February 9, including for Best Picture, Best Director, Best Actor, and Best Supporting Actor.
Meanwhile, the Academy Awards recently announced its plan to expand from 10 to 15 the number of shortlisted titles for the International Feature Film Oscar. This year, the Academy members will vote online rather than in-person to choose the 5 finalists among these 15 titles.
Any copying, republication or redistribution of KOFIC's content is prohibited without prior consent of KOFIC.
Related People Related Films