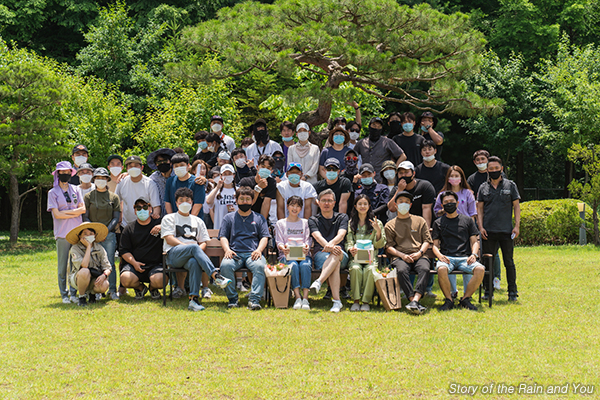 Stars KANG Ha-neul and CHUN Woo-hee wrapped filming for the upcoming melodrama Story of the Rain and You (translated title) on July 4. Production on the third film from director CHO Jin-mo lasted just over three months, having started on March 23. KANG So-ra also appears in the film in a supporting role.
KANG Ha-neul will play Young-ho, an aimless youth who is retaking his exams for the third time and enters into a correspondence with So-hee (CHUN Woo-hee). Their relationship deepens as they share more letters. KANG So-ra plays Soo-jin, another student in Young-ho’s cram school.
Story of the Rain and You is KANG Ha-neul’s first film role in three years as the young star recently completed his obligatory military service. Prior to his service, KANG scored hits with films such as DONGJU; The Portrait of A Poet (2016) and Midnight Runners (2017).
Leading actress CHUN Woo-hee, who first gained attention for the hit indie Han Gong-ju (2014), is known for THE WAILING (2016) and Oneday (2017). She most recently appeared in the Berlinale-invited thriller Idol (2019) and the melodrama Vertigo (2019).
Known across the big and small screen, KANG So-ra appeared in the 2011 hit Sunny and was most recently in theatres for the Lunar New Year comedy SECRET ZOO.
Director CHO Jin-mo debuted with the insurance salesman comedy Suspicious Customers in 2011 with RYOO Seung-bum and went on to make the comedy Making Family in 2016.
Story of the Rain and You is now in post-production and will be launched theatrically at some point in 2021. The film is the latest local production by Sony Pictures Entertainment Korea, which released its first local language film, the trial drama Innocence, last month.
Any copying, republication or redistribution of KOFIC's content is prohibited without prior consent of KOFIC.
Related People Related Films