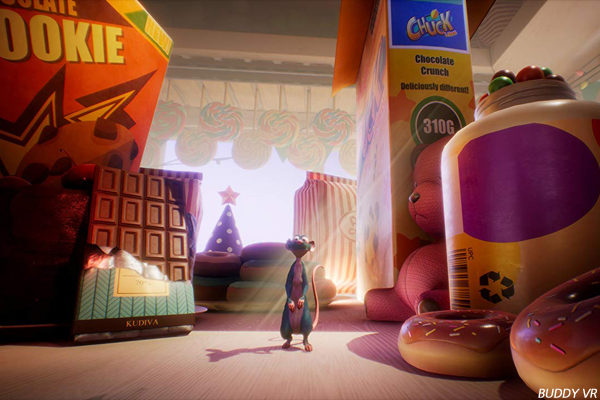 A Korean film has earned a prize in the VR competition at the Venice International Film Festival for the second year in a row. Following Gina KIM’s top prize winning for Bloodless (2017) last year, Chuck CHAE has earned the Best VR Experience Award (For Interactive Content) for BUDDY VR at the 75th edition of Venice.
From animation production house Red Rover, BUDDY VR, which was one of 30 short films vying in the Venice Virtual Reality competition, is the second animated short from director CHAE. Following his work as a VFX producer on KIM Yong- Mr. Go (2013), CHAE worked on several blockbusters such as The Taking of Tiger Mountain and Young Detective Dee: Rise of the Sea Dragon, as well as the Korean 3D short omnibus MAD SAD BAD (2014).
BUDDY VR takes place in an amusement park called Liberty Land that was featured in the US-Korea co-produced animation The Nut Job (2014), which was also produced by Red Rover. BUDDY VR is the name of a lonely mouse in Liberty Land.
Last year, Gina KIM earned the top prize in the same competition, which happened for the first time. Bloodless examined the horrific Dongducheon murder of 1992 of a Korean sex worker by an American GI. The work has continued to screen at museums around the world.
CHAE’s work was the only Korean film invited to Venice this year.
Any copying, republication or redistribution of KOFIC's content is prohibited without prior consent of KOFIC.
Related People Related Films Related News