HAN Ka-ram’s OUR BODY to Premiere at TIFF 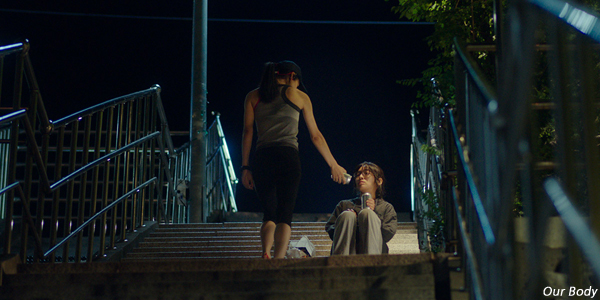 HAN Ka-ram debut film Our Body will have its world premiere this month in the ‘Discovery’ section of the Toronto International Film Festival (TIFF). A feature project of the Korean Academy of Film Arts (KAFA), the film features rising star CHOI Hee- in the lead.
CHOI (aka Moon CHOI), the breakout name who earned several Best New Actress prizes last year for her turn as a Japanese woman aligning herself with Korean independence activists in imperial-era Tokyo in LEE Joon-ik’s Anarchist from Colony (2017), leads Our Body as a 31-year-old woman who struggles to work or even find her purpose in life. All that changes when she starts repeatedly crossing paths with a determined jogger and decides to take up the hobby as well.
TIFF programmer Giovanna Fulvi writes: “A strong debut from the promising HAN Ka-ram, Our Body is on one level a critical look at contemporary social issues among young adults in an economy where employment is hard to come by and age becomes a handicap. But it's also a bigger discussion about how society shapes us as individuals.”
Our Body springs from the graduate program of the Korean Academy of Film Arts, which has in past years been responsible for works such as JO Sung-hee’s End of Animal (2011),  Bleak Night (2011) and  Socialphobia (2015).
Next month, Our Body will have its Asian premiere when it screens in the ‘Korean Cinema Today - Vision’ lineup of the 23rd Busan International Film Festival.
Other Korean films screening in Toronto this year include LEE Chang-dong’s BURNING and Hong Sangsoo’s Hotel by the River.
Any copying, republication or redistribution of KOFIC's content is prohibited without prior consent of KOFIC.
Related People Related Films Related Company Related News