Popular TV Drama SANDGLASS to be Made Into Movie 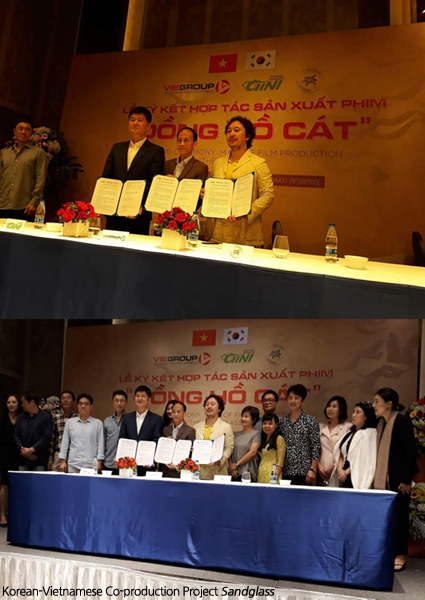 The TV series Sandglass (1995), which starred KO Hyun-, will be made into a movie by Korean and Vietnamese companies. Korea’s Hyunmoo Enterprise and Vietnam’s Jini Holdings revealed through a press release that they had agreed to co-invest about USD 20 million (KRW 20 billion) into a production budget for the project and made a contract with Vietnam’s VIE Group. Since 2016, Hyunmoo Enterprise has worked to make a film version of the political drama, with original writer SONG Ji-na.
Sandglass depicts the tragic relationships among three friends in the operating in the darker parts of society in Korea during ; Tae- (CHOI Min-soo), Woo- (PARK Sang-won) and Hye-rin (KO Hyun-) grow to become a gangster, prosecutor and big player of the casino industry, respectively. The SBS drama was immensely popular in 1995.
Writer SONG Ji-na and actor Joon-ho, as well as officials of the three companies, attended the investment conference for the Korean-Vietnamese project. Hyunmoo Enterprise described VIE Group as a “total entertainment company established by Vietnam’s Vin Pearl Resort’s VIN Group and Dong Hai Group”.
Any copying, republication or redistribution of KOFIC's content is prohibited without prior consent of KOFIC.
Related People Related Company