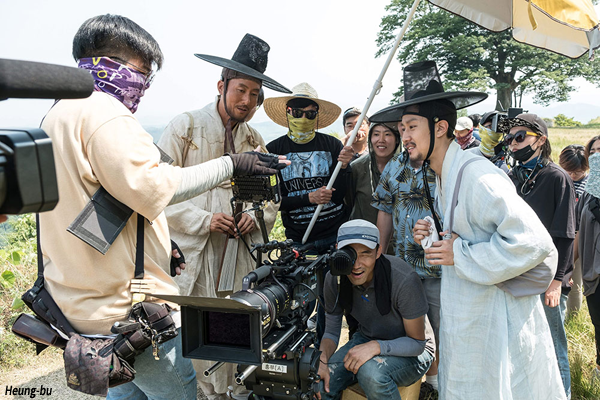 After three months of filming, period drama Heung-bu completed production on August 18th. JUNG Woo and KIM Joo-hyuk led the cast, which also includes JUNG Jin-young and CHUN Woo-hee, in the latest film from 26 Years (2012) director CHO Geun-hyun.
Based on the classic Joseon Era story ‘Heungbu and Nolbu’, CHO’s film follows an author played by JUNG Woo, who writes a novel to find his lost brother. On his travels he encounters a nobleman, played by KIM Joo-hyuk, who enlightens him.
JUNG Woo recently scored a hit alongside HWANG Jung-min in The Himalayas (2015) and featured opposite KANG Ha-neul in the court drama New Trial earlier this year. KIM Joo-hyuk has had a busy few years, which have included roles in Hong Sangsoo’s Yourself and Yours (2015), LEE Kyoung-mi’s The Truth Beneath, Confidential Assignment and The Tooth and the Nail, among others. He is currently filming Director LEE Hae-young’s Drug War (2012) remake.
JUNG Jin-young was last seen in Pandora and A Taxi Driver, while CHUN Woo-hee of THE WAILING makes a special appearance in the project.
Following 26 Years, director CHO has been busy shooting several smaller films, including the 2014 drama Late Spring, the children’s film Bungaeman and the drama Heyday (working title), which is awaiting release.
Heung-bu will be released by distributor Lotte Entertainment at some point next year.
Any copying, republication or redistribution of KOFIC's content is prohibited without prior consent of KOFIC.
Related People Related Films Related Company Related News