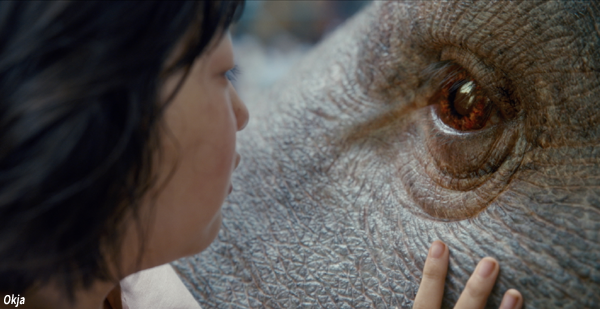 Rolling in a wave of controversy as one of the first Netflix films to screen at the Cannes Film Festival, along with Noah Baumbach’s The Meyerowitz Stories, BONG Joon-ho’s Okja had a rocky start on the Croisette when its early morning press screening experienced a screen malfunction for several minutes before the screening was rebooted without further trouble.
Yet any fears of bad omens were quickly brushed aside as first tweets and shortly reviews began to stream in following the screening, most of which offered gushing praise for the auteur’s ambitious globe-trotting family eco adventure fantasy.
Peter Bradshaw of The Guardian was one of the first to chime in, offering the film a rare five star rating as he praised the film’s “glorious storytelling gusto” and “pure energy and likability” that “make it such a pleasure.”
Handpicked by the director through extensive auditions, the film’s star AHN Seo-hyun was singled out by most for praise as the 14-year-old Mija lead of the film. In an otherwise middling review that described the film a “classic case of a film that you emerge from not knowing quite who it’s intended for,” Screen International called her performance “candid and touchingly downplayed.”
Concerning other performances, Vanity Fair called Tilda Swinton “a hoot as Mirando’s tightly wound C.E.O.”, while Jake Gyllenhaal “goes a too big as a squeaky-voiced Steve Irwin-type.”
Heavily reliant on digital imagery for the design of the namesake creature protagonist, Okja has also received plaudits for its “superlative marriages of digital and live-action” by The Hollywood Reporter.
As a morality tale on the environment, some reviews such as Indiewire referred to the film as “savvy political satire”, while others were less convinced, with The Telegraph describing it as an “awkward blend of find-the-missing-pet adventure and anti-meat satire.”
Okja, which also features Paul Dano, Steven Yeun, BYUN Hee-bong and YOON Je-moon, will be made available to global Netflix users beginning on June 28th.
Any copying, republication or redistribution of KOFIC's content is prohibited without prior consent of KOFIC.
Related People Related News