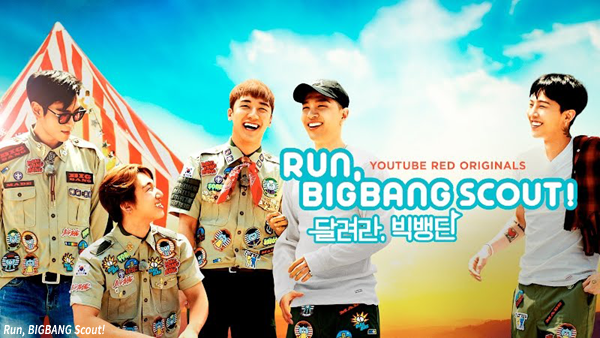 The YouTube Red subscription service has launched its first Korean-language original series, a show named Run, BIGBANG Scout!, which follows the popular K-pop band.
The six-episode series debuted its first two installments on April 26th, with subsequent entries to debut each following Wednesday. The reality-comedy show pits the famous band in unfamiliar situations and shows each member pay tribute to their family and fans as they spend time together before band member T.O.P is scheduled to begin his mandatory military service.
With 140 million records sold, BIGBANG is one of the world’s most successful and well known music phenomena. The Run, BIGBANG Scout! program was designed and produced by the band’s label and agency YG Entertainment, in order to commemorate the group’s 10-year anniversary.
“We are thrilled to launch YouTube Red’s first Korean-language original series with BIGBANG, one of music’s biggest bands for the last decade,” said Alex Carloss, director of YouTube Originals.
Given that BIGBANG’s official YouTube channel boasts 7.2 million subscribers and nearly 3.5 billion views, the online video giant is hoping to convert their massive fan base into an audience for the series.
Priced at KRW 7,900 in Korea and USD 9.99 in the States, YouTube Red offers ad-free access to all of YouTube’s content, from videos to music and original series and movies. It has so far launched in South Korea, the US, Australia, New Zealand and Mexico.
Any copying, republication or redistribution of KOFIC's content is prohibited without prior consent of KOFIC.
Related Company