Jun 13, 2016
63 films to Be Screened in 6 Sections Including Newly Established ‘Sixth Sense’ 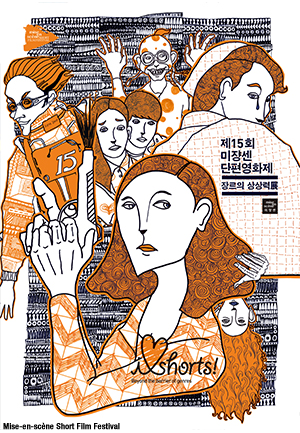 The competition shortlist line up was announced for the 15th edition of Mise-en-scène Short Film Festival. The number of submissions this year is 1,037, which is a new record in domestic short film festival competition.
Mise-en-scène Short Film Festival has opened a new competition section called Sixth Sense, covering mixed genres, making it 6 competition sections in total. Therefore 63 films are going to compete in 6 different sections, that are ‘A City of Sadness’ (films with a social viewpoint), ‘A Short Film about Love’ (melodrama), ‘The King of Comedy’ (comedy), ‘The Extreme Nightmare’ (horror/fantasy) and ‘The 40,000 Blows’ (action/thriller) and ‘Sixth Sense' (mixed genres).
Fifteen films are going to compete in the section A City of Sadness, including 0814, Unmoving clock by BAEK Yu-kyung, and Silent by JEONG Zi-on; 13 films in the section A Short Film about Love, including Knocking on the Door of Your Heart by CHOI Yun-tae, and Can’t help falling in love KIM Yoon-gi. The King of Comedy introduces 9 films including You should know that by HAN Ji-su, and Fangs by SHIN Jong-hun; while The Extreme Nightmare screens 8 films including The Ghost Whale by CHOI Yang-hyun and MAHNG by KIM Eu-min; and The 40,000 Blows introduces 8 films including KEEP GOING by KIM Gun and Bargain by LEE Chung-hyun.
Sixth Sense is a new section launched this year, where you meet a variety of films based on different genres ranging from documentary, essay, experimental film to new media and more. The competition in this section will be among 10 films including White Island by KIM Doo-rim, and Blues with Me by LEE Han-jong. The 15th edition of Mise-en-scène Short Film Festival will take place on June 30th, in Megabox Art Nine and Megabox Isu.