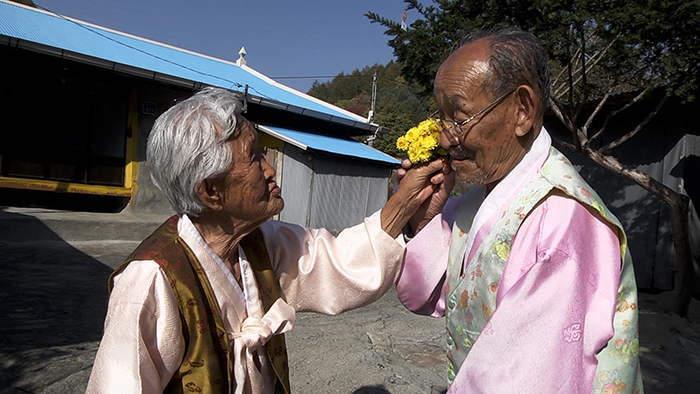 The hit documentary My Love, Don’t Cross That River, about an elderly couple who have been married for 76 years, has become the most successful Korean independent film of all time after crossing the three million admissions mark on Christmas Day.
The previous record holder was the 2009 documentary Old Partner with 2.93 million admissions, a mark that My Love, Don’t Cross That River eclipsed in only 29 days. Yesterday, the film, which was ranked fourth on the daily chart, added 261,016 viewers to its tally, indicating that it has yet to burn off demand and should continue to perform strongly.
Further down the chart, Christopher Nolan’s Interstellar sold 17,474 tickets in tenth place, which was enough to finally bear the sci-fi blockbuster over the ten million admissions milestone after nine weeks in theaters. Interstellar is the third film to cross the threshold this year, the third non-Korean film to do so since records began and the 13th overall.
The other blockbusters to reach the mark in 2014 were the Disney animation Frozen (10.3 million viewers) and local period blockbuster Roaring Currents (17.61 million viewers). Local drama The Attorney also crossed the mark in 2014 but had already brought in half of its take late last year. 2014 now marks the first time that three films have attracted ten million admissions at the Korean box office.
Any copying, republication or redistribution of KOFIC's content is prohibited without prior consent of KOFIC.
Related Films Related News