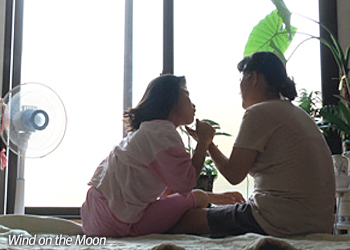 The International Documentary Film Festival Amsterdam (IDFA) which is the largest documentary film festival in the world will be opening its 27th festival on November 19th and will close curtains on the 30th. From 3200 submissions, 298 films were selected and there will be 3 Korean films as a part of their programming this year.
In the Competition for Feature-Length Documentary section, YI Seung-jun’s newest, Wind on the Moon will be playing. YI came into the documentary world through his 2012 film, Planet of Snail which was invited to numerous international film festivals including Dubai, Tribeca and Hot Docs film festivals. Again dealing with the disabled, Wind on the Moon, his comeback feature in 3 years, is about a daughter who was born blind and deaf as seen through the perspective of the mother.
In the Paradocs section, KIM Kyung-man’s short Beep which previously went to DMZ Korean International Documentary Film Festival and Toronto International Film Festival will be screened, while BAE Go-eun’s Betrayal I is a part of Paradocs: Amsterdam Art Weekend at IDFA, a line-up devoted to video art. BAE’s work is a personal take on the vulnerable and unstable position of women in current society. The complete festival schedule will be available on IDFA’s website on November 6th.
Any copying, republication or redistribution of KOFIC's content is prohibited without prior consent of KOFIC.
Related People Related Films Related Company