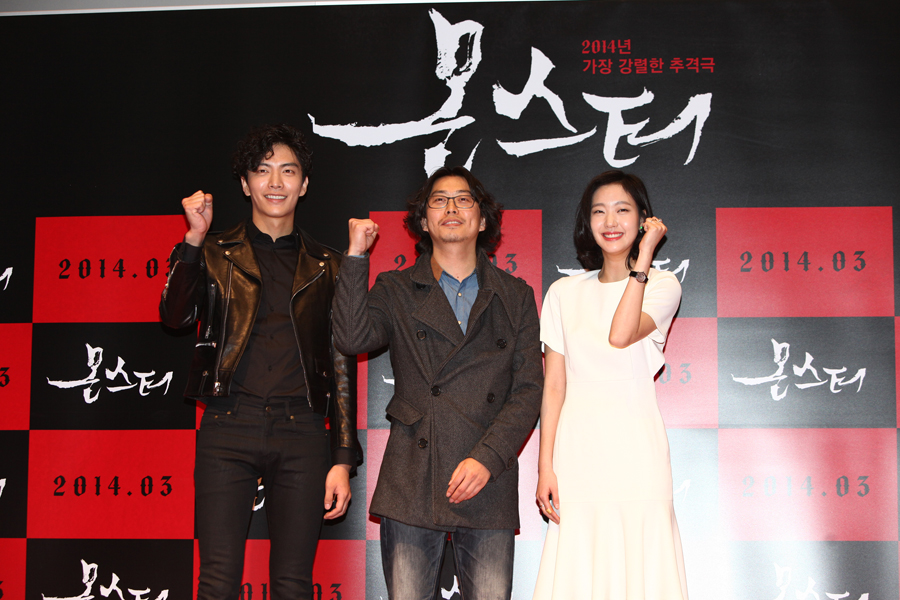 A press conference for Monster was held on February 13th. Monster, the second feature film by director HWANG In-ho, who made his debut with Spellbound (2011), is a thriller in which the cold-blooded murderer Tae-soo (LEE Min-ki) is chased down by Bok-soon (KIM Go-eun) who lost her only sister by him.
The main characters of Monster are played by LEE Min-ki of Spellbound (2011) and the rookie KIM Go-eun, the muse of Eungyo (2012). A big transformation from KIM Go-eun is expected as she will change from the innocent high school girl of Eungyo (2012) into a vengeful woman. “I thought the character was out of the ordinary when I received the scenario. I like that Bok-soon never gives up the fight even though she is a physically weak woman” said KIM Go-eun, expressing her reason for joining the project. Director HWANG In-ho said “I was very pleased because I didn’t expect both LEE Min-ki and KIM Go-eun would be able to change into these characters so well. Their transformations are even more impressive than I imagined.”
Similarly, LEE Min-ki turned himself into a ruthless killer in opposition to his previous comic and romantic roles. Describing his character, Director HWANG said that “Tae-soo is not a murderer who plans in advance, but takes action on impulse. He can hurt those he doesn’t like with any objects in front of him.” He also explained, “The difference between Tae-soo and other serial killers in existing thrillers is that he does not kill people for pleasure. He is driven to murder by unavoidable circumstances.” LEE Min-ki revealed, “In order to be immersed in the character, I worked out aggressively and went on a harsh diet almost abusing myself. I could feel that I was getting more sensitive and irritated by the smallest things. I tried to experience the feeling of obsession to bring myself to perfect condition. I did my best to use these feelings during filming.” Lee made an effort to lose 16 kilograms for the project.
Monster, financed and distributed by Lotte Entertainment, will be released on the 13th of next month.
Any copying, republication or redistribution of KOFIC's content is prohibited without prior consent of KOFIC.
Related People Related Films Related Company