May 10, 2013
Film Festival Gets Ready for Summer of Imagination 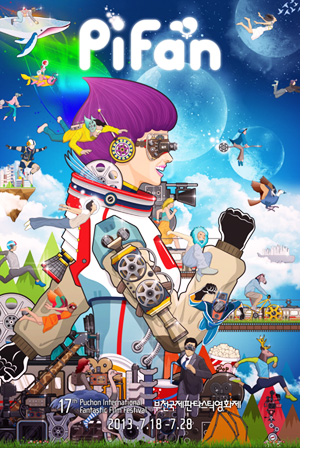 The official poster for the 17th Puchon International Fantastic Film Festival (PiFan), to begin on July 18th, has been released. This year’s poster was designed by LEE Yong-gyu, a designer at Design Corps who has held exhibitions at the Book Fair in Frankfurt, Tokyo Type Director’s Club and the Seoul Design Festival. Design Color, which has made posters for Five Senses of Eros and Horror Stories also participated.
The official poster with its feel of speed and dynamism shows the typical excitement of the festival. The blue background made of the mix of land, sea and the outer space carries the coolness of the summer film festival. LEE, the designer of the poster, said, “The main character is the guide to the film festival full of numerous secrets and imagination and the other characters are its excited and thrilled companions.”
PiFan is gearing up for its festival with the release of this official poster. The 17th PiFan will begin on July 18th and screen about 210 genre films through until the end of the festival on the 28th.