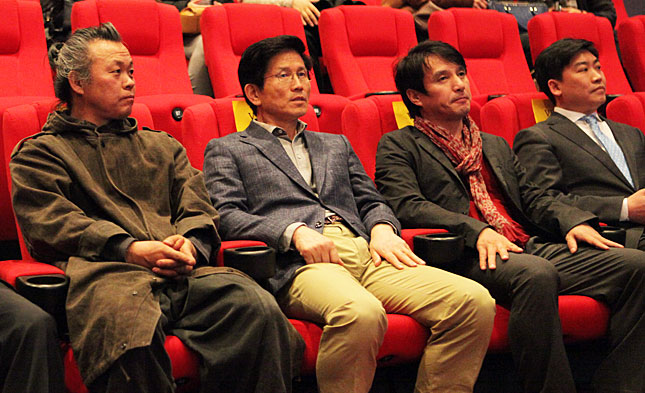 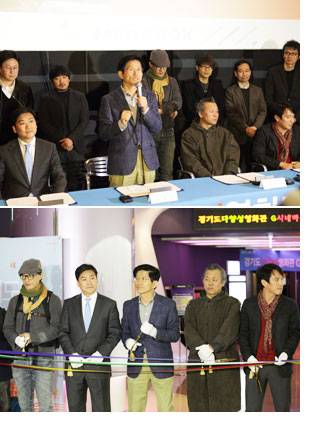 "There is no meaning without the audience. I hope for more diversity-oriented cinemas from today" said director KIM Ki-duk at the opening of Megabox Suwon Youngtong Diversity Cinema on April 11th. He also said, "It is my personal hope to see some 100 diversity cinemas, 5% of multiplex cinemas. That will encourage independent directors" thereby expressing his desire for more support for cinemas for independent films.
The director of the Gyeonggi Performing and Film Commission said, "It is tougher to open a film than to actually shoot a film. I hope today will be a turning point to let people know that there are so many different kinds of films around us." The opening ceremony was attended by KIM Moon-su, governor of Gyeonggi Province, and CEO of Megabox YEO Hwan-ju who signed an MOU on the diversity cinema. The ceremony was also attended by director YI Seung-jun of Planet of Snail, director JEON Kyu-hwan of The Weight, director PARK Jung-bum of The Journals of Musan as well as director SHIN Dong-il. Also KIM Dong-ho, honorary director of the Busan International Film Festival as well as directors CHUNG Ji-young and LEE Joon-ik and actor AHN Sung-ki sent congratulatory video messages.
Governor KIM said, "There is a lot of support for indie films but if film industry people let us know which direction we need to take, we'll do our best." CEO YEO lamented the current situation where focus is concentrated on commercial films adding "I hope today will be a historic day for independent films."
Any copying, republication or redistribution of KOFIC's content is prohibited without prior consent of KOFIC.
Related People Related Films Related Company