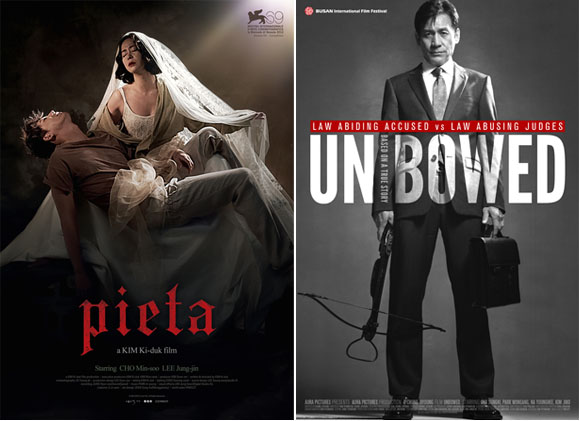 The 5th Beppu Hot Spring Korea Japan Next Generation Film Festival will open on February 22nd at the Beacon Plaza in Beppu, Oita. The festival which opens in a hot spring town mainly screens films that were awarded by Korea's Film Critic Association as well as short films made by university students from Korea and Japan.
At the opening ceremony, Pieta by KIM Ki-duk, winner of the Golden Lion at last year's Venice as well as four awards from the Korea Critics' Association will be shown. After the screening KIM Ki-duk and CHO Min-soo will have a question and answer session with the audience.
Actor AHN Sung-ki, winner of the Critics' Association Best Actor category as well as the festival director on the Korean side, and director LEE Myung-se will also attend the opening ceremony. Director IM Kwon-taek's Mandala (1981) and Shimizu HIROSHI's Mr. Thank You (1936) will be screened at the Korea-Japan Film Lecture given by a consultant from the Korea Critics' Association, KIM Jong-won. Directors LEE Sang-cheol and SHIN A-ga's Jesus Hospital will also be presented at the festival.
Any copying, republication or redistribution of KOFIC's content is prohibited without prior consent of KOFIC.
Related People Related Films