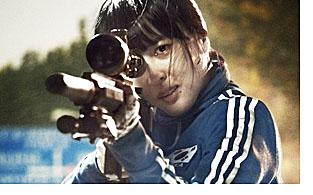 The Korean Film Council announced that 26 Years has been voted as the best Korean film of the year by Twitter users. KOFIC held a special voting event in December and Architecture 101 came second with Masquerade and National Security taking the third and fourth places. Number five was Nameless Gangster: Rule of the Time, the sixth spot went to Pieta, the seventh place was taken by All About My Wife and the eighth spot went to A Werewolf Boy. Two Doors and Two Weddings and a Funeral took the ninth spot jointly.
26 Years centers around the grieving families of the victims of the Gwangju Massacre of 1980 who come together to avenge 'the man' who gave the order to kill civilians. It was directed by CHO Geun-hyun who had a career as an art director in many hit movies. It stars JIN Goo, HAN Hye-jin, IM Seul-ong, BAE Soo-bin and LEE Geung-young. The film was made through a group funding project which invited regular cinemagoers to contribute parts of the production budget. It has drawn 2,909,901 as of midday December 26, raising expectations that it will go over the 3 million mark.
Any copying, republication or redistribution of KOFIC's content is prohibited without prior consent of KOFIC.
Related People Related Films Related Company