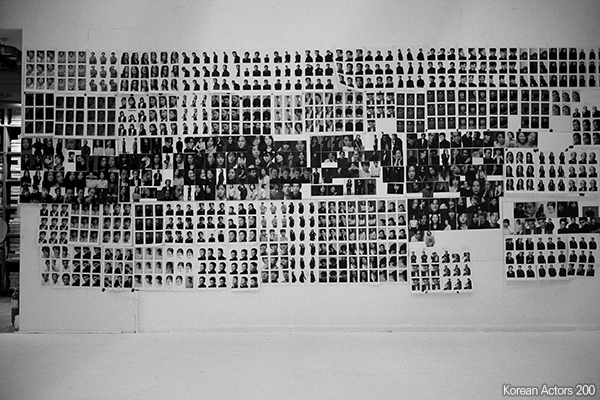 The Korean Film Council (KOFIC, presided by KIM Young-jin) is stepping forward to promote Korean actors on the global stage. This new campaign, which will be run under the name of Korean Actors 200, is a methodical project that will consist in selecting the 200 actors (100 men and 100 women) that best represent the present and future of Korean film and introducing them to film people overseas.
The Korean Actors 200 campaign, itself a part of a larger archiving plan revolving around Korean performers, will showcase actors selected while taking into consideration their box office power over the last decade, awards earned in festivals in Korea and abroad, their level of contribution to independent cinema, and their participation in international projects. The resulting 200-strong list will be made public in March of this year through a dedicated website. This website will contain detailed bios for each actor accompanied by portraits highlighting the areas where they excel and showreels.
“This content will not only be accessible online”, KOFIC explains. “We plan on providing the same content in a brochure that we will send to people in charge of the world’s most prestigious festivals such as Cannes, Berlin, and Venice, international VOD service providers like Netflix, international talent agencies, and leading media outlets like Time and the New York Times.” KOFIC adds, “We are also producing showreels that will let you have a quick look at each actor’s filmography, and we will provide high-quality portfolios to film professionals from around the world and officials in charge of global entertainment and media companies. We plan to do all that through a platform dedicated to making Korean actors better known to foreign audiences”.
Photoshoots for this international promotion campaign will be handled by KIM Jung-man and AHN Sung-jin, who count among the most renowned Korean photographers. KIM, who won the Young Photographer Award from the Rencontres d’Arles photography festival in France in 1977 and produced a large variety of photo series over a career spanning four decades, is the most well-known photographer in Korea. AHN is Korea’s best-known celebrity photographer who has worked with many stars over the last 30 years since his debut in an advertisement in 1992. Both will throw their heart and soul into creating the photos that will be featured in the brochure, which will come out later this year under the title “The Actor is Present”. The title is intended as a proclamation that anyone in search of actors who can move the whole world need look no further. Work on the book and the showreels is being undertaken by film media company The Screen.
“We expect that this campaign will increase the level of recognition the diverse actors we have in Korea are enjoying abroad and be of great help to those among them who want to make it abroad”, KOFIC concluded. KOFIC has recently launched other campaigns such as Young Korean Cinema, which showcases young people working in Korean film, and KOFIC Supports, which presents Korean film companies looking for overseas business opportunities.
Any copying, republication or redistribution of KOFIC's content is prohibited without prior consent of KOFIC.
Related Company