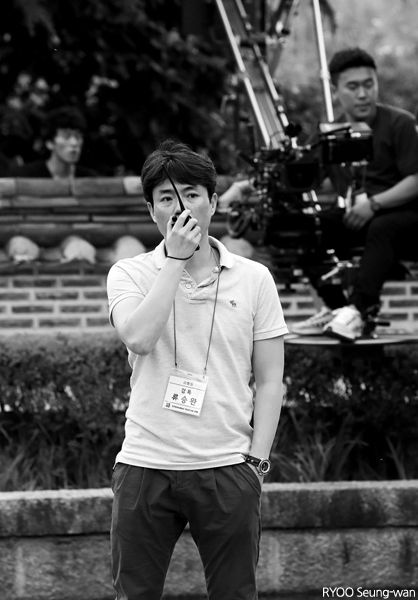 Blockbuster director RYOO Seung-wan held a Master Class at the Beijing Film Academy on December 1.
Co-hosted by the Korean Film Council (KOFIC) and China’s Beijing Film Academy, the master class gave Chinese film students and filmmakers the opportunity to learn more about Korean culture and cinema. During the master class, RYOO discussed his career and answered the questions from the audience. He also screened his latest film, The Battleship Island (2017), which was released in late July.
Set during the Japanese colonial period, The Battleship Island details the accounts of Hashima, a hellish island where Koreans were forced into hard, manual labor by the Japanese. In the film, a group of Korean laborers plan a daring escape from the prison-like island. The film, which starred HWANG Jung-min and SO Ji-sub, broke box office records on its opening night, going on to attract 6.5 million viewers to theaters.
Action auteur RYOO, arguably Korea’s top genre film director, is known for explosive, big-budget blockbusters that perform well at the box office. His previous two films, The Berlin File (2013) and Veteran (2015) both have sequels in the works.
“It will be a meaningful event for the Chinese audience, who have suffered the same pain in history.” said LEE Joon-dong, the vice chairman of KOFIC, “I hope that this master class will be an opportunity to advance and develop the relationship between Korea and China.”
KOFIC began hosting the Korean Director Showcase in 2012 to introduce Korean directors to Chinese audiences. However, the program was put on hold last year after the THAAD missile crisis created political tension between the two countries.
Any copying, republication or redistribution of KOFIC's content is prohibited without prior consent of KOFIC.
Related People Related Films Related Company Related News