Jun 07, 2016
Audience and Sales both Decreased, with CAPTAIN AMERICA: CIVIL WAR at Number 1. 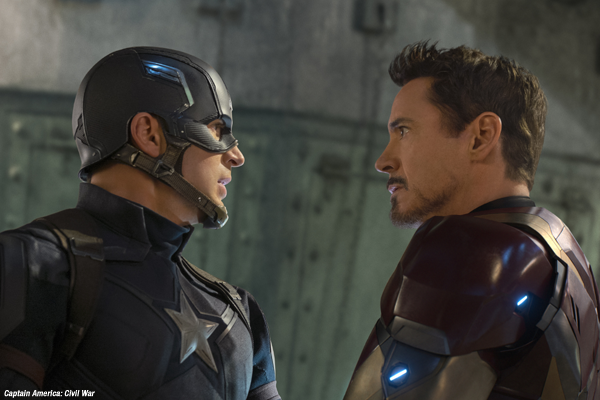 According to the April 2016 Korean film report announced by the Korean Film Council, the number of audience and sales both declined, which marks the lowest since the beginning of the year, being much lower than the same time last year.
The number of the viewers in April 2016 was 9.99 million, and the sales was USD 68 million, which is 2.73 million viewers and USD 19 million shorter than in the same period last year. In terms of percentage, as many as 21.4% and 21.8% are respectively lower. The domestic and foreign film shares occupy 33.3% and 66.7% respectively.
The number of viewers for Korean films were 3.25 million and the sales was USD 22 million, which means the audience decreased by 10,000 but the sales increased by USD 1.09 million compared to the same time last year. For foreign films, the audience and sales marked 6.74 million and USD 46 million, which is 2.72 million and USD 20 million shorter than the same period last year. The big decline in foreign film was a considerable factor in the low performance of Korean film industry in April.
Captain America: Civil War has taken the throne in the entire box office. Released on April 27th, the film attracted 2.98 million viewers just in 4 days. At the 2nd place is Zootopia with 1.2 million viewers (with the accumulated viewers being 4.7 million) and Time Renegades is at number 3 with 1.1 million admissions (with 1.2 million accumulated admissions). INSANE is at the 4th place with 1.04 million viewers, and Batman v Superman: Dawn of Justice is at the 5th place with 610,000 viewers.
Any copying, republication or redistribution of KOFIC's content is prohibited without prior consent of KOFIC.
Related Films Related Company Related News