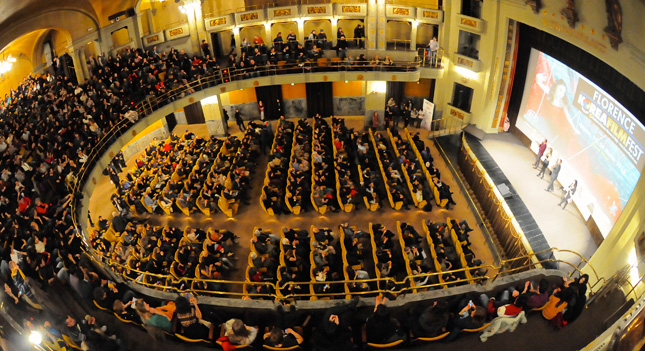 For the 11th time, the city of Florence in Italy set the stage for a massive celebration of Korean cinema. The 11th Festival of Korean Cinema in Italy, also known as the Florence Korean Film Fest, took place from March 15th to 24th, featuring 52 works (32 features and 20 shorts), including 16 national premieres, and a number of high profile guests from the Korean film industry.
Opening the festivities in style was CHOO Chang-min’s period drama Masquerade starring LEE Byung-hun, which currently stands as the fourth most successful Korean film of all time. Director CHOO was also in attendance. KIM Ki-duk’s Pieta, which has been on a rampage on the festival circuit following its Golden Lion win during last September’s Venice International Film Festival, served as a fitting closing film for the event.

Chief among the guests was revered actress JEON Do-yeon, as a retrospective featuring eight of her most notable works was included in the program. The star, who famously won the Best Actress award at the Cannes Film Festival in 2007 for LEE Chang-dong’s Secret Sunshine, thrilled local fans and press during her visit. Her retrospective featured The Contact (1997), Happy End (1999), Untold Scandal (2003), My Mother, The Mermaid (2004), Secret Sunshine, My Dear Enemy (2008), The Housemaid (2010) and Countdown (2011).
JEON’s The Housemaid director IM Sang-soo also joined the festivities as he presented that work as well as last year’s The Taste of Money. Both films were featured at the Cannes Film Festival. IM combined this trip with another invitation to nearby Switzerland where he attended the Fribourg International Film Festival for a special masterclass on his The Housemaid and the original KIM Ki-young version from 1960.

The 52 films on the program were broken down into a number of sections. The K-Eros program focused on emerging erotic films, including The Concubine, for which director KIM Dai-seung made the trip to Florence. A new K-Animation section showcased recent arthouse hits The King of Pigs and Padak. The Korean Horizons sidebar featured seven contemporary works including CHANG Hun’s Korean War set The Front Line (2011) and JUNG Byung-gil’s noir Confession of Murder, for which the director was in attendance. Independent Korean films were also on display in their own section, with four works including Pluto, whose director SHIN Su-won also greeted viewers in Florence. In addition, a Horror Night featured the recent K-Horror The Sleepless. Among the shorts on offer was Jury, the debut of KIM Dong-ho, the honorary director of the Busan International Film Festival. Other shorts were previously featured in the lineups of the Asian International Short Film Festival (AISFF) and the Seoul Extreme Short International Film Festival (SESIFF).
Outside of the theater, other Korea-themed events were also held in relation with the festival. IM Sang-soo was on hand for a special panel discussion on March 16th. A Korean Sculpture Festival was held, put on by the Korean Sculptor's Association and the territory of Fiesole. Various other weekend events included an open air exhibition from Florence’s Taekwondo Centre, an exhibition of Korean swords called Haedong Gumdo from the Florentine Association Mu dok kwan dojang, and the Tuscan K-Pop Association’s Flash Mob K-Pop. The local nightlife also caught the Korean fever with a concert by Bye Bye Sea (Annyeongbada) at the Hard Rock Cafè, one of the most popular K-pop groups in South Korea, not to mention a DJ Set with OH Yoo-suk.
The celebration of Korean cinema came to an end on March 24th with its own awards ceremony. Among the official awards, Nameless Gangster: Rules of the Time picked up the top prize in the Horizons section, while SHIN Su-won’s Pluto was deemed the best independent feature. A special mention was also awarded to the omnibus feature Modern Family, for which director SHIN also contributed a short, the Cannes Film Festival award winner Circle Line. Audiences were also given a chance to vote for their favorite films and their top three was comprised of Helpless (third), Modern Family (second) and The Front Line in first place.
Ten days, 52 Korean films, a slew of guests and a wide array of events ensured the success of the 11th edition of the Florence Korean Film Festival. With the international prominence of Korean cinema on the rise, one can only imagine that Florence's 12th annual celebration of Korean film will take place in even grander style.
Any copying, republication or redistribution of KOFIC's content is prohibited without prior consent of KOFIC.
Related People Related Films Related Company