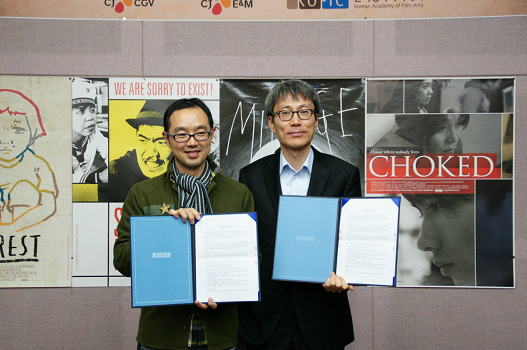 The Korean Academy of Film Arts (KAFA) has renewed its partnership with leading entertainment media company CJ E&M and its affiliate exhibition company CJ CGV. In an academic-industry partnership deal signed yesterday (Dec. 14) at the Academy, the three entities agreed to work together to cultivate filmmaking talent that could become the future center of the film industry.
CJ E&M and CJ CGV has been a supporter of KAFA since 2007.Their support funds this year will be used to promote and release KAFA’s fourth cycle of feature graduation films.
KAFA’s feature graduation films have included film festival favorites includingYOON Sung-hyun’s<Bleak Night>which made its world premiere in the Busan International Film Festival New Currents competition, going to the International Film Festival Rotterdam (IFFR) Tiger Awards competition and Hong Kong, Munich and the Fantasia international film festivals.
At the signing of the deal at KAFA, head of the CJ E&M’sKorean film division GIL Jong-chulsaid he felt like he was visiting an alma mater and added, “I think lending support to the nurturing of excellent filmmaking talent can provide a valuable base for the development of the future of the Korean film industry.”
Head of KAFA, CHOI Equan replied, “We’re thankful to have been able to collaborate thus far and hope you will support the Academy in making even better films. We will repay you by producing fine professionals as the best of film education institutions.”
Dec. 15, 2011
Any copying, republication or redistribution of KOFIC's content is prohibited without prior consent of KOFIC.
Related People Related Films Related Company